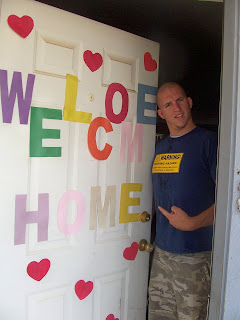 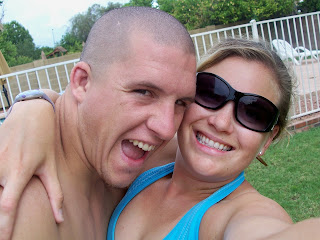 Anthon made it home (for good) early Thursday morning, around 4AM. It has been fabulous having him home & I'm so thankful that our lives are getting back to "normal". We have about a month before everything turns chaotic, but at least we have some time to veg together before then (between my last 3 weeks of swim lessons, that is)! 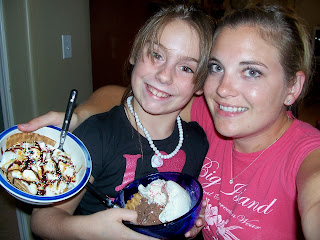 I thought work would be somewhat nice today (rain usually = slow day), but... NO! First of all, my manager is on vacation & it seems like everyone I work with turns RETARDED when he's gone- like they forget how to do their jobs. Second of all, 2 people didn't show up, so we had 1 teller in the drive up, 1 in the merchant room, & lucky me... solo on the front line. Then, at around 2pm our computer system completely shut down, so we had to run all the transactions by hand- Aleia, please tell me you feel my pain!! So yeah, work sucked!
But, once I got home my niece Bonnie made me an ice cream sundae & made it all better :)! She's been staying with me for a few weeks now & it's been a lot of fun... she's a big help around the house & helps me not be so lonely! Speaking of no being so lonely... I found out tonight that Anthon's coming home this weekend!!! YEAH!!!!

I was tagged & here's how it works...
Do you have a story? One that makes you say "Wow," and it makes you feel good to reflect on it, to remember it, and to possibly share it? I do! I thought we might like sharing them, so here is one of mine:


I started to like Anthon as more than a friend during the summer of 2001, when he held my hand on our stake's pioneer treck. I was hoping it would blossom into a summer romance... I couldn't have been more wrong! Not only did I not get to see him for the rest of the summer, I didn't even talk to him until school started & even then it was like we were back to square one (just friends- even though I had a major crush on him)! I decided to ask him to MORP (girls ask guys dance) in November 2001 & we had a great time, but at the end of the night, he hugged me goodbye & RAN into his house! It was exactly one month later when I was driving back to school for practice & it started to snow... It was inspirational! Looking around at the "winter wonderland" I became even more twitter-pated & said to myself, "I'm going to kiss Anthon! Tonight, in the snow, it'll be perfect... NO BUTS ABOUT IT!" After practice, I sat in the hallway waiting for him to come out of the locker room, then I walked casually with him out to the parking lot. I chickened out at first- We said goodbye, I walked to my car & he started walking to his. Then I just stopped, turned around, ran toward him, spun him around, & kissed him... The BEST THING I'VE EVER DONE!!!! Six years later, here we are! This behavior is completely opposite of my normal personality, I promise... But I thank heaven it happened!! 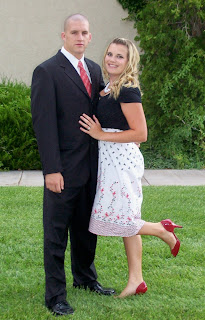 The closest thing we have to a family picture! 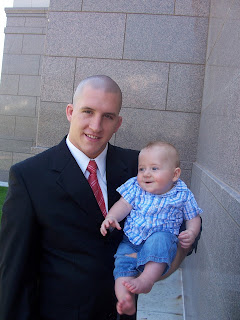 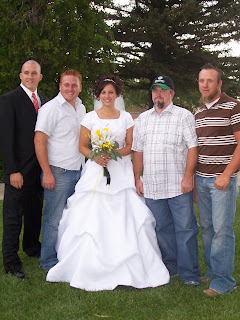 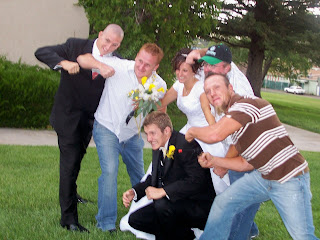 I know about 90% of the people who read my blog where there this weekend, but I figured I'd post some cute shots anyway! For the other 10% who may not know, Sherry is my sister-in-law & she got married this weekend to McKay Mills in the Snow Flake Temple. All the guys pretending to punch the groom are her brothers... They're playful like that :)!

Happy 4th of July everybody! I'm in good 'ole California (got here lasat night) & Anthon is getting suited up for a FUN day in Santa Monica! We're going to hang out on the pier, ride some rides, eat LOTS of food, & of course lay out on the beach! I'll post lots of pictures once I get home (if I can get my stud of a hubby to take some with me)!! Anyway, I hope everyone has a great day! Remember how lucky we are to live in this country, even if you don't agree with how it's run, we still enjoy the freedoms of being a citizen & that alone is amazing to me! I am SO thankful for the men who have fought (& died) to keep this country free & safe.... AND The Home of The Brave!!