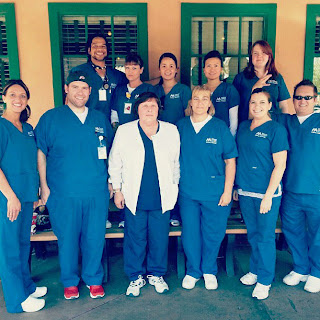 I haven't blogged too much about this semester, but today was my last day at clinical, so I figured it would be a good time to talk about it. I REALLY enjoyed my clinical group/ instructor & facility this semester! I was at Chandler Regional Hospital and had a lot of opportunities to see/ perform some really cool things!! Ok, maybe to some people watching operations, starting IV's or putting in a Foley catheter isn't that cool but to a 1st year nursing student, it's the COOLEST! I actually felt like I was doing real nursing tasks this semester, instead of just doing the dirty work licensed nurses didn't want to do or being a gopher! And not to brag or anything, but on my exit interview my instructor told me that I was her best student this semester... she may have said that to everyone else in the class (since the reviews were done one-on-one) but it sure made me feel good! 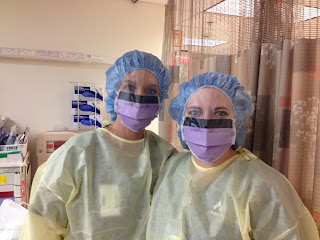 This was my FAVORITE day in clinical! My friend, Jenn, & I got to go observe in the ER for the afternoon & saw some super cool things!! This was taken right be fore we watched a central line get put in. 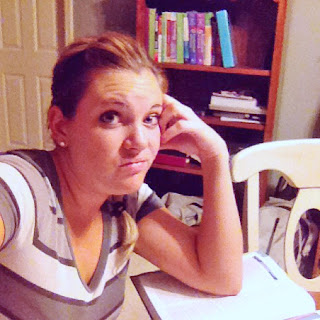 My final is in a little over a week (on Sterling's birthday, to be exact) and this is how I'll be until then- Study, study, study!! Honestly, I'm pretty much OVER this semester- especially fluids & electrolytes!!! But, I think an A is in sight & it would be really awesome if I can get it... Wish me luck!!﻿

Anthon took Roman to Father's & Sons this past weekend & they had a really fun time! He debated about taking Sterling, but we eventually decided that it would be best to wait another year ﻿before he gets to go... he still seems kind of young! Plus, Anthon took our friend's 2 boys since their dad had to work, so his hands were already pretty full! They went up Friday night, had dinner & a camp fire, slept, got up Saturday morning, ate breakfast, went on a little hike, and then headed home. Short & sweet! Anyway, here are the pictures Anthon took of their trip: 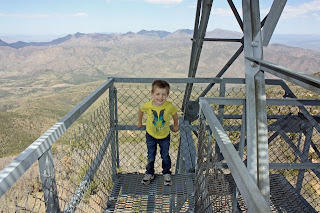 At the top of the hill, on the radio tower ^ & throwing rocks! 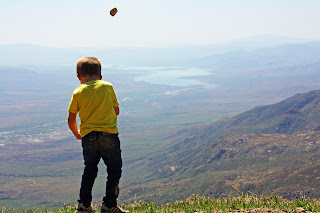 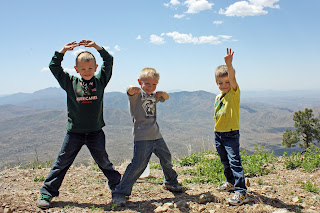 Teagan, Rayle, & Roman- not sure what they're doing, but the poses are pretty cute! 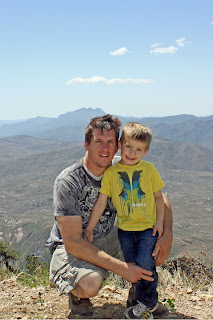 View from the top! I love that they have this special tradition every year! I know Roman really enjoys going camping with just his daddy- they get to bond in a way that they can't at home, and I love watching their relationship grow! Such a sweet daddy, & such a darling son!

Back in November, Roman fell off of a quad & got a little scrape on his hand. The scrape has since grown into the bump you see circled in red. His doctor referred us to a plastic surgeon, who suggested we remove whatever the mass was before it became an issue (by obstructing a nerve or something in his hand). We agreed & today was the big day of surgery! 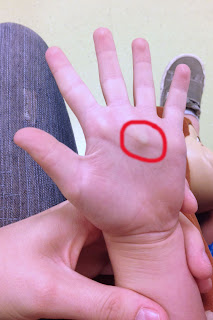 Well, he was in good spirits until they made him change out of his clothes into purple "girl" clothes and started talking about taking him away from me. Every time I'd talk to him at home about what was going to happen the day of the surgery, he always freaked out about the part when they take him to the OR & I go back tot he waiting room, so I asked the Dr. if they would give him something to help him relax before they took him. They gave him some versed & BOY did it make him relax! He acted like he was drunk- saying the funniest things, slurring his speech, having zero balance! It was hilarious- & definitely made it easier for both of us when they took him back!! When the time came, he just hopped in the little red wagon, laid down and said, "Bye, mom! See you later." like it was no big deal. 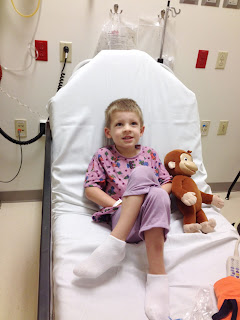 This is him on the versed^ & below is in recovery when he came out of surgery. 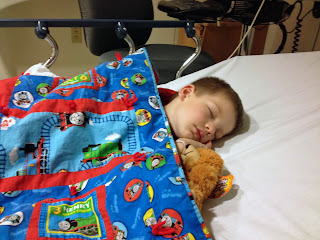 Everything with the surgery went great- turns out the foreign body was a cactus spine. But, when he woke up the anesthesia made him SUPER sick & he couldn't stop vomiting :(. After about an hour of throwing up, they gave him a shot to help calm his belly & he finally stopped vomiting. 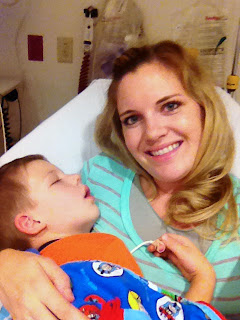 Once he got the shot, he was able to relax & fell asleep. He was snoring SO loud!! After about another hour of observation, they let us go home. He has a few stitches in his hand & a dressing over it, but I learned all about dressing changes this semester so I'm not too worried about it ;). 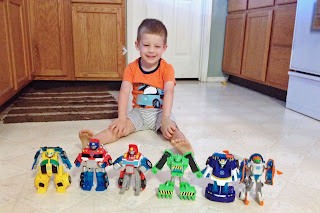 As his special reward for being brave he got the helicopter Rescue Bot, Blades, which completed his set. He was SOO excited to have all of them!
He played with them all afternoon & acted like nothing had even happened this morning! I LOVE listening to him play with them! He kept saying phrases like, "Come on, fellas..." & "... Autobots, roll out!" His little imagination is darling!! 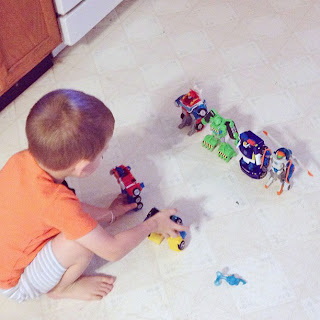 I'm so thankful that it's over & behind us! I'm especially thankful  that everything went well & that his little hand won't have any nerve damage!

Last month of being one!

I can't believe that Sterling is going to be 2 next month!! I haven't done a post on just him since he was 18 months, so I figured I might as well do one more while he's still 1! He's growing up so fast, but still seems like my little baby (course, it helps that he really is physically little- He's barely fitting into size 18 months)! His little personality is really starting to shine & it seems like he's learning/ doing new things everyday! Here are a few pictures that I've taken of him at 23 months old: 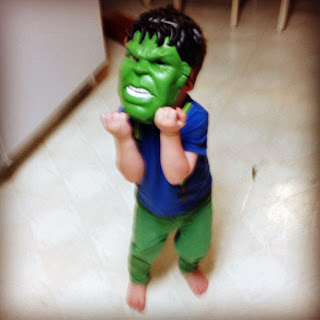 Haha- He loves to be tough like his Daddy!! 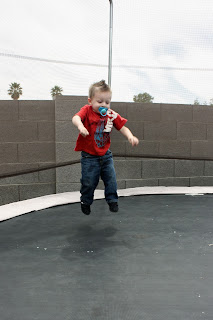 He's learned to jump on the trampoline... & it's pretty much the cutest thing I've ever seen! 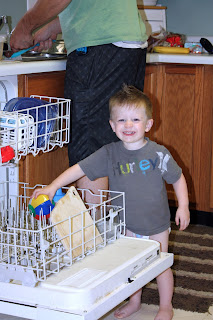 He loves to "help" do dishes, which basically consists of pulling all the dirty dishes out or putting all his toys into the dishwasher. 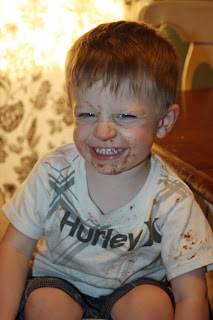 Independent eating= lots of messes for me to clean up, but I don't mind! Like I said before, the boy loves his food!
I sure do enjoy this boy- I refer to him as my angel child probably more often than I should, but he really is a pleasure to be around all the time! He has such a sweet/ tender disposition and is always willing to give us hugs & kisses! My favorite is when he grabs my face, kisses one cheek, then turns my head & kisses then other cheek, & repeats that several times! He is such a joy to have in our home & I ADORE him!! I'm dreading the day when he hits the terrible two's & my sweet baby days are over :( I wish I could freeze time & have him stay this way forever!!!
﻿