After 9 & 1/2 years, today is my last day working at Chase Bank!! It was a bitter sweet kinda day. I definitely won't miss all the annoying things customers do (like snapping their IDs on the counter, asking "are you open" when I JUST greeted them, or responding with "I just wanna make a deposit" when I ask them how they're doing), but I will miss the people I worked with! I had a lot of good friends at my branch & will miss being able to associate with them every day!
Anthon took me & the boys out to dinner at PF Changs tonight to celebrate. Both our boys fell asleep on the drive there and stayed asleep for most of the meal- talk about awesome!! Anthon & I had a great date, without having to pay for a sitter :)
I'm kinda nervous, but SO excited for this next chapter of my l life! I know nursing school is going to be difficult and my entire life routine is going to get shook up, but I like to think I'm up for the challenge! School doesn't start until August 20th so I have a month & a half to stay home & play with the boys this summer- I'm REALLY excited for all the fun we'll have!!

PS- Sterling walked on his own for the first time today!! He would take about 4-5 steps back & forth between me & Anthon... He would get SO excited & you could just see on his face how proud of himself he was :)

Our week at the beach

We left for Mexico with Anthon's Family on Saturday, June 16th and were able to stay an entire week. Anthon's parents have a condo in a small, farming village right on the beach called Santo Tomas (which is about an hour south east of Rocky Point). They & one of Anthon's siblings & his family stay at the condo while the rest of us stay in a beach house in the same subdivision. It's so secluded that it's like we have the entire beach/ ocean to ourselves, with the exception of local fishermen from time to time. The trip was a blast!! Most of Saturday was spent traveling, shopping at the market, and getting settled into the house, so I don't have any photo's, but here's a break down of what we did the rest of the trip:
Day 1- Sunday, 17th
Since it was Sunday we didn't play in the ocean or ride any of the toys, but we did spend the day outside enjoying the beach & each other: 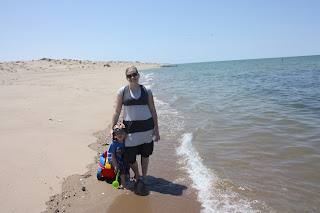 It was Father's Day, also, so we made dinner for the guys & tried to make their day special!
Day 2- Monday
We spent our 2nd day on the beach- starting first thing in the morning as soon as we woke up! 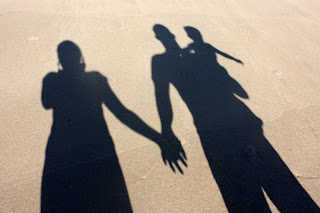 The rest of the afternoon we just played- made sand castles, swam, buried each other in the sand, flew a kite, you name it! Oh, & Anthon sunburned himself pretty good too!
Day 3- Tuesday
Instead of walking out to the water to sea shell hunt 1st thing in the morning, we decided to take a ride a few miles down the beach to an area that was more rocky when the tide was out to see what we could find. We had a BLAST together & saw a lot of crabs, fish, sand dollars, and different shells.
Roman learned to drive a quad by himself today. Not by any encouragement on our part, I might add. The boy just hopped on one, started it, and took off. There was no turning back- he is in LOVE with them now!
That evening was the 1st time they brought the jet ski out. Jason & Anthon pulled the kids around on a tube while the rest of us enjoyed watching the kids hang on for dear life! 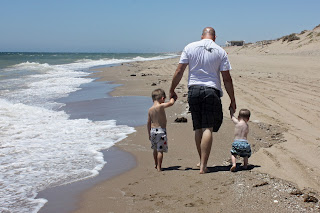 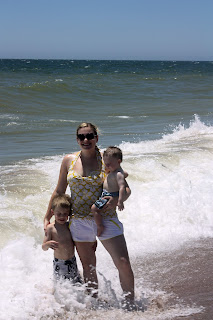 We played on the beach that afternoon & then played volleyball that evening on the beach- Oh, it was a blast! The weather was perfect, the sand was perfect, and we had plenty of people to make up teams & talk some decent trash- SO MUCH FUN!!
That night, after the kids went to sleep, we stayed up & played games with Anthon's siblings﻿ & their spouses. It was HILARIOUS! I hadn't laughed that hard in a LOOONG time!
Day 5- Thursday
Which brings me to the 2nd scare of the trip.
They took the jet ski out that morning and the water got really rough, really fast when the tide started coming in. See how big the wave is behind me & the boys in the picture up above? Like as tall as Roman. Well, When they were trying to load the jet ski onto the trailer, the waves were bigger, and the guys were just getting man-handled by them- the water kept taking the jet ski where they didn't want it to go & jack knifing the trailer. As I'm watching the guys struggle I see this big wave throw the jet ski into Anthon- hitting him in like his hip/ thigh area. He fell down & I could tell he was having a hard time standing back up, while the waves were still crashing down on him. The next wave that hit him, I see is head hit the trailer hard & bounce off of it, so I hurry & run down to him. He wasn't conscience & every time a wave came in (which was almost constant) his head would be under water. Sherry's husband, McKay, & I were trying to pull him up onto shore, but he's so freaking heavy, he wouldn't budge! Thankfully, we he fell he landed on the trailer, so they were able to drive the articat & tow him out on the jet ski trailer. We got him on the shore & he was still unconscious, but was breathing (it had probably been only a minute or 2, but it seemed like a lot longer!). I remember in that moment, starting to really panic thinking, "what if something is seriously wrong?! We're in the middle of NO-WHERE & in Mexico!" The men hurried & gave him a Priesthood blessing, & as soon as they started blessing him, peace came over me & I knew everything was going to be OK. He woke up shortly after they finished the prayer & I asked him if he could move his toes (some of the guys thought he had hurt his back) & he could. It took him a minute to get up, and he was pretty sore for the rest of the trip, but he wasn't seriously injured- no concussion, broken bones, not even bruising!
The Lord was REALLY watching over us that day & I'm SO thankful that we can pray to Him & ask for His help anytime!
Anthon relaxed and we all stayed inside taking care of him for the rest of the day, but that evening we took a ride down to the beach & watched the sun set. 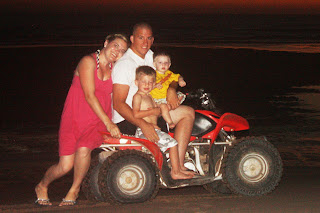 Day 6- Friday
Our last full day was spent, where else?? At the beach! We rode toys, played in the water, & enjoyed the sand, sun, & all the family! 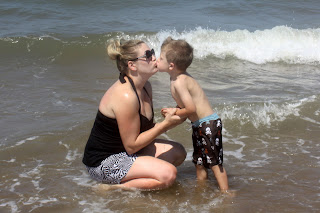 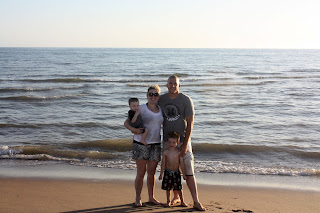 Day 7- Saturday
We packed & loaded pretty much everything Friday night, so Saturday morning we just ate breakfast & headed to the market. We shopped for a little while, got some Thrifty ice cream, and then headed back across the border. You'd think that after a full week I'd be ready to come home, but I kinda wasn't! It was SO nice to have all that uninterrupted time with family in such a nice place! I can't wait until we can go back!! 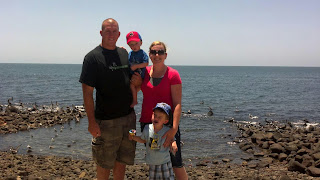 There are a TON more pictures from our trip, so if you want to check them out in my Facebook album click HERE

3 fun days to celebrate all in one week... It's a crazy week every year, but so much fun!!
1) Father's Day
We celebrated it a week early because we will be in Mexico on the Sunday Father's Day really falls on, and I figured instead of dragging their ties with us to Mexico (it's what I give him every year), he could open them a week early.

2) June 14th- Anthon's 28th Birthday!
Anthon had to work on his birthday in the morning (BOOO!) so the boys & I decorated the house. Then once he got off, I had to go to work (BOOOO! again) & he took the boys to Bass Pro Shop for a few hours, just to get out of the house & check out some manly things.
Once I got off work, I rushed around picking up dinner & Anthon's ice cream cake (which Cold Stone screwed up on- they made the right cake, just the wrong size. They ended up giving me another small cake for free so we'd have enough for everyone at the party, but it took FOREVER!). I got home like 15 minutes before people started showing up. We had some friends & family over and it was a LOT of fun! 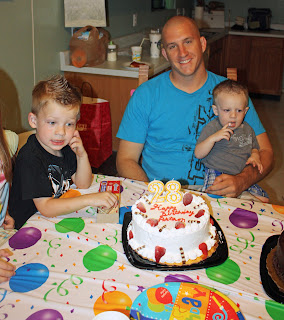 3) Our Anniversary
Early Friday morning we took Sterling in to have his tear duct surgically opened. It was a quick, easy procedure and didn't seem to bother him at all. I'm SO thankful it wasn't complicated & that it's taken care of!
The rest of the day was spent running around like chickens with our heads cut off- shopping, trying to get organizing, cleaning, & packing for our week long trip to Mexico. But that night Anthon & I went out to celebrate our 7th Wedding Anniversary (it's really on the 17th-same day as Father's Day this year- but again, we'll be in Mexico for it). He took me to to dinner at Ruth's Chris Steakhouse. The food there is AMAZING!! If we were rich, I would eat there every night. Seriously.
Every. Single. Night!
I had so much fun on our date- all we did was talk & reminisce over our life together. I think I say this every year, but I'm so happy with our life! Even though we haven't accomplished a lot of our goals and there are tons of things we still need to improve on, I'm completely content because I'm with HIM! Anthon is everything to me, and everything wonderful that I have comes from him :)

Anthon & his brother's played in a softball tournament in Show Low over Memorial weekend. It was SO nice to get out of the heat, but the first two days were WINDY & cold!! We were good sports about it though & still watched the games. These were the only shots I got of the games before my camera died- 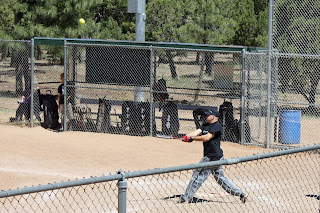 Besides watching the softball games, we got to do a lot of other fun things like:﻿
﻿
& go for rides on Grandma & Grandpa's toys. 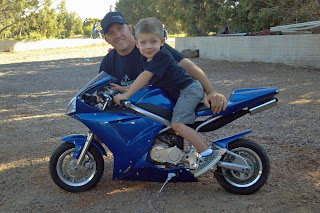 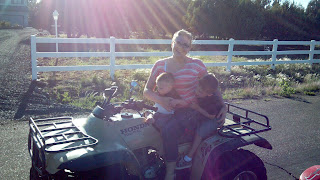 It was a really fun trip & I'm SO looking forward to spending more time on the mountain this summer after I leave my job!!