Say Hello to our Little Friend!! 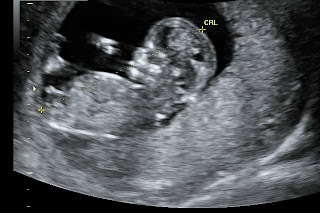 I got to go in for another ultrasound today & since the baby didn't look as much like an alien this time, I thought I'd share a photo. Today it was 5.3 centimeters long ( about 2 inches) & VERY active :)! 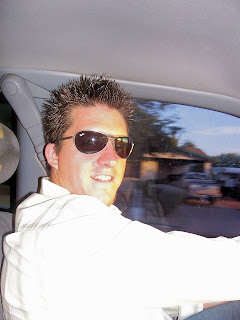 Can I just tell you how sweet my husband is??? Yesterday, he got up for work at the usual time 6AM, worked all day in the heat (/torrential rain thanks to the monsoon) & then at 8PM when he got off, he went straight over to my mom's to help her move some furniture (which I should mention was a HUGE sacrifice by itself because he missed his softball games!). By the time we headed home (at 10PM) he was EXHAUSTED! As we were leaving I told him I needed to stop for gas, but he should just head on home (he still needed to do his 45 minute routine to rap up the night!!)... well, as I pulled into the gas station I saw his work truck sitting there so I pulled into the pump next to it. Anthon got out of his truck, walked over to mine, & without saying a word (he just smiled at me) started pumping my gas for me!! I know it doesn't seem like a huge deal, but to me, it was SO sweet of him to stay up a few minutes later & help me (even with something as easy as pumping my own gas)!!

My favorite part of the trip I didn't take my camera with me, of course!! We saw some dolphins jumping out in the water, so Anthon had me jump on the jet ski with him & we drove out to them. We pretty much came to a stop & they just swam right up to us & were jumping right next to the ski- there was probably 20 or 25 of them all around us! It was a little creepy watching all these dorsal fins swim toward you, but it was SO amazing to see them jump (& they were like a foot away from us)! Then when we started to drive, they would swim right next to the ski & continued to jump & swim next to, under, & around us! Talk about once in a lifetime experience!! This is just a video of Anthon riding the jet ski on our last day...
This 2nd video is of another fun thing we did... chasing birds! In this video, we almost hit one of the birds, so that's why we're all screaming. Hey, we're easily entertained!! 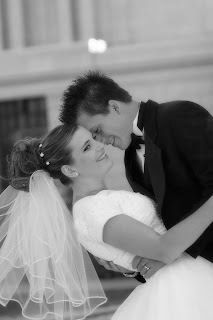 Today is Mine & Anthon's 3 year wedding anniversary... Crazy how time flies by!!! It seems like only yesterday when I was chasing him down in our high school parking lot for a kiss (& that was almost 7 years ago!!). I am so thankful for Anthon & the relationship we share! It's been so great learning & growing together- we've had some GREAT times and made some once in a lifetime memories, but we've also gone through a lot of heart ache & trials! I think it's the combination of all those things that make us into what we are today ( & what we will become in the future). We truly are best friends & I can't imagine spending eternity any other way!!

Well, Anthon woke up this morning with some type of stomach bug, so I went to church & taught our sweet little demons by myself. Then after church, we went to my mom's for dinner (Since Papa Gerald was up in good 'ole Show Low). After dinner, We all went to the cemetery to clean up my dad's grave... it was hotter than he....ck :), but it was a good time! Here are some pictures:

Sydney checking out Grandpa's grave for the 1st time 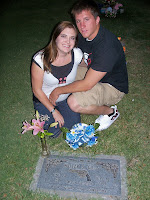 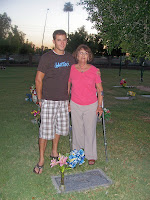 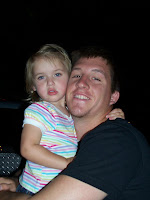 Syd was feeling a little under the weather too, so they were miserable together!


I hope all you Dad's out there felt loved & appreciated today for all the things you do for your families!! 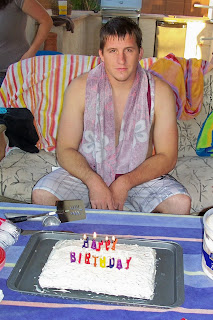 Today was Anthon's 24th birthday & we celebrated by having a BBQ & pool party...
It was a lot of fun! Thanks to everyone who came out & celebrated with us!
I, personally, am VERY thankful Anthon was born :)!

After the Trial of Our Faith... 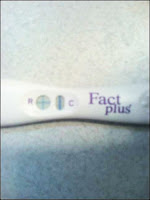 After almost a year & a half of trying, endless doctor visits, & many tearful nights Anthon & I are thrilled to announce that we're expecting!! The beauty of it all is that I got pregnant right before my specialist was going to put me on Clomid (a fertility drug). I'm almost 3 months (yeah, we kept it secret for 2 months!) which means our baby will be born at the beginning on January... SHUCKS! No tax breaks for 2008!! It hasn't been too hard on me except that I'm EXHAUSTED all the time, & I never feel like eating, but if I don't eat I get the fabulous nausea & vomiting! But seriously, we couldn't be more thrilled & our testimonies of a loving Father in Heaven have really been strengthened over the past year!!

I'm going in for my first ultrasound on Wednesday before we leave for Mexico, so I'll maybe give another update once we get back on the 24th... if I have any fun pictures or news :)