It's the simple things in life that make me the happiest

Sunday evening we decided to get out of our house for a little bit... so we went to the park, fed the ducks, & enjoyed the beauty of some of God's creations. There were so many things I appreciated while we were there- the variations of birds/animals, the beauty of the setting sun, the joy I felt watching our children- their innocence & desire to learn, & the companionship of Anthon. 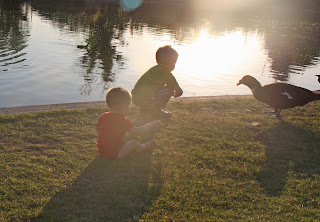 Here's a little thought that I really liked from Elder James E. Faust that we learned in our Marriage & Family class at church:
"One of the less obvious but more significant reasons for divorce is the lack of a constant enrichment in marriage, … an absence of that something extra which makes it precious, special, and wonderful, when it is also drudgery, difficult, and dull. In the enriching of marriage the big things are the little things. It is a constant appreciation for each other and a thoughtful demonstration of gratitude. It is the encouraging and the helping of each other to grow.
Marriage is a joint quest for the good, the beautiful, and the divine”
Click HERE to read the rest of the lesson 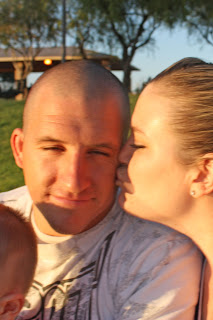 I never realized how important the little things were until I heard that quote, or noticed how often I was on the recieving end of them. Anthon is always trying to do "something extra" to encourage me or let me know he loves/appreciates me. Whether it be the little love not left in an unexpected place, the shoulder/ neck massage given without being asked, the text message that just says "I thinking of you & I love you", the extra effort made to ensure we have family prayers morning & night, or just reaching over to hold my hand when we're driving somewhere. I KNOW how lucky I am to be his partner!! I love that we truly have a partnership, too! We work together on everything- work, cleaning our house, cooking meals, the kids, homework, church callings-I love that I can ask for his help with ANYTHING & know that he'll be there for me!
To me, our dull, every-day, messy, hectic life is my fairytale happy ending (but the best part is, I know there really is no end to our fairytale)! 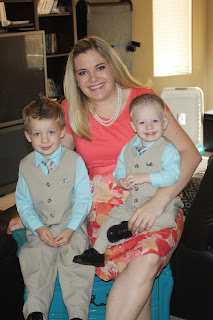 Today was awesome! I spent the day realizing all the blessings I have in my life that can be related to this day- My own dear mother who has been such an inspiration, example, & friend to me. Her life exemplifies charity, faith, & the pure love of Christ- anyone could learn these virtues just by observing her in her everyday life, but I had the pleasure of being TAUGHT by this amazing woman. My sweet mother-in-law who has always accepted, loved, & supported me in spite of my many flaws. Who raised a son in such an amazing way that he was able to become the confident, humble, honest, loyal, hardworking, forgiving, trustworthy man that I was lucky enough to marry. Anthon is the love of my life, literally my better half, & the most wonderful thing in my life! I love that I am the mother of HIS children! My sons... oh, my darling little boys! They are amazing, funny, smart, loving, forgiving, obedient, kind, cheerful, adorable, and helpful... sometimes I wonder how I got to be so lucky. Motherhood is the most rewarding, joyous, stressful, frustrating role I've ever had, but I feel overwhelmingly grateful for the chance I have to learn from these little boys & watch them grow. I am SO thankful to be a mother, & to have the examples of our two wonderful mothers to look toward as I try to teach these precious sons of God.   All I know is... I AM such a lucky girl!!

Sterling had his 12 month check up this morning. Here are his stats:
Weight: 18.7lbs- 5th percentile
Height 29.5in- 50th percentile
Head 27in- 25th percentile
I specifically asked her where he ranked percentile wise, so I would know (cause they usually don't give them to me & just compare him to his past weights, heights, ect.). People always ask me if he's big/small for his age, & I never really know what to tell them, other than he seems small to me, what he was when he was born, & that he has been on the same curve ever since. Roman was always big for his age & I enjoyed having a chart-toping boy, but I kinda like that Sterling a little guy... keeps me feeling like he's my baby for a little bit longer!! But the boy is SKINNNNNY! I need to start cooking some high calorie, kid friendly meals for him... anyone have any good recipes?!?!
Other than being super lean, he's a healthy, happy, smart little guy!  He can say "Momma", "Dadda", "No. no", "Baba", "Hi", "Bye, bye", "Was that?", "Ball", & "Car" He still only has 4 teeth- 2 on top, 2 on bottom. He's not walking independently yet, but loves to cruise around the furniture or with his walker. He's taken a few steps on his own, but as soon as he realizes he's flying solo, he'll slowly sit down & start crawling at lightening speed. His favorites right now are: *Food- strawberry's, oranges & apples especially,but really will eat anything I put in front of him! *Toys- balls & cars... he loves to play catch & makes the cutest "vroom" sound while driving his cars around on the floor! *People- Anthon & Roman! He LOVES his daddy & brother, and I love watching them all play together. He's gotten really good at giving kisses to anybody though :) *Water- whether it's bathing in it, swimming, or drinking it, the kid loves water! *Music- He loves to dance & is pretty good at moving to the beat! Some of the things he could live without are: getting dressed, having his nose wiped, getting strapped into his car seat, having his diaper changed, being snuggled by his mommy when he wants to play- pretty much all the same things he's hated for most of his life! 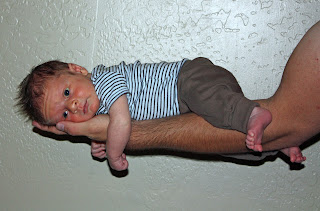 A year ago today this tiny, sweet, adorable miracle joined our family. That was the fastest year of my life!! Sterling's life is seriously ﻿a blur- I remember his birth like it was yesterday, but everything else has flown by! Still, I have relished every second with this little angle- he is a literal gift from our Heavenly Father & has brought the sweetest spirit, so much joy, and a lot of fun into our home!! I can't believe he's a year old!!! 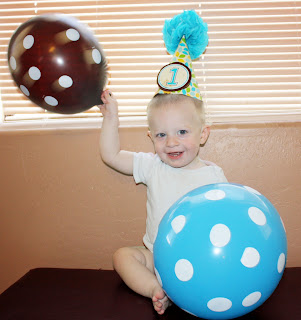 We celebrated this milestone with a fun party yesterday! Here are some pictures of the festivities:
﻿ 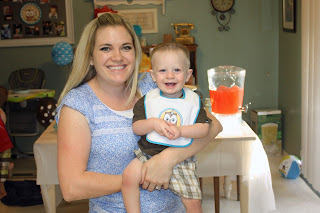 Ah, what more can I say?! We LOOOOVE this boy! He makes us all so happy-he is so sweet, funny, patient, CUTE, & simply the best! I've spent a lot of time the last couple weeks scrapbooking the last year (my entire pregnancy til today) and it was so fun to look back & see how he's grown, and remember all the fun times we've had with him. I'm eternally indebted to the Lord for the chance He's given me to have Sterling in my life! I have learned more about patience, forgiveness, charity, the pure love of Christ, gratitude, and so much more in the last year- & I know it has everything to do with this little boy. I'm so lucky to get to be his mommy!! Happy birthday, Sterling Boy!
** If you want to see more pictures of all the fun, you can check out my album on Facebook by clicking HERE

Roman's been quite the mischevious little boy this week...
& it's only Tuesday.
Sunday morning I found this lovely mess after I got out of the shower.
Then, yesterday morning SOMEHOW he got a hold of a pair of scissors, climbed into Sterling's crib, & butchered his hair. 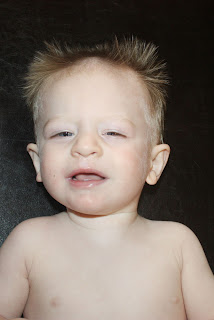 Sterling was born with a full head of hair & has never been bald, so it was kind of a disappointment for me, to say the least, to have to shave his head! Right before his birthday, too! 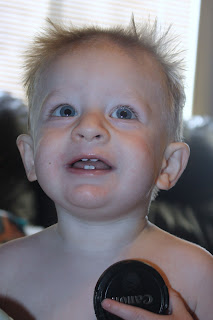 But, my friend made a comment that totally put things into perspective for me...
"Don't let it stress you too much... messes clean up and hair grows back." 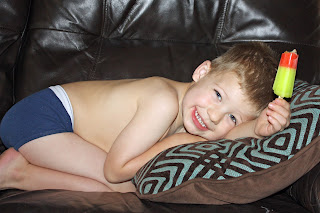 As crazy as he is at 3 years old, I know this phase will go by so fast and then I'll be missing the impulsive, curious, hilarious, insane things he did & said! So, I'm trying to take it all in with that perspective, not get too worked up over these kinds of things, & teach myself to only shower/use the bathroom when he's asleep!!