The birth of our baby girl


Thank heavens the epidural worked, because Anthon texted me at 6:45PM saying that he had just left school and that traffic was REALLY bad. While we waited for Anthon to get there my doctor came in to check me again & I was complete- 100% effaced & dilated the full 10cm... shocker, I know! I could actually feel my bulging bag of water and asked her to be careful not to break it because I felt like it was the only thing holding the baby in! A few of my coworkers/ friends came in to check on me and wish me luck and I enlisted some of their help (to take pictures and such) for the delivery. Thankfully, some one along the way had thought to tell my charge nurse in the nursery that I was admitted & wouldn't be working that night, because I totally forgot to due to my pain induced delirium!! Anthon finally got to the hospital around 7:30PM- they got everything ready for the delivery and got me into position. Anthon had mentioned wanting to catch the baby and my doctor was ok with it, so he got gowned up and she explained to him what to do.
With the next contraction she broke my water and then I pushed... one little push  was all it took (it was more like half of a push, really) and Rayleigh Joy was in her daddy's hands!!
She was born at 7:52PM- she was perfect! I could see a little of each of her brothers in her perfect squishy face. She had such dark hair and she seemed so BIG to me- I mean, she had fat rolls all over her back!! I thought it was because my perception was skewed from taking care of preemies all the time, but she was 8# 10oz and was 20" long (my 2nd biggest baby!). 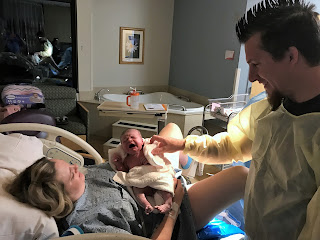 We had a bunch of visitors shortly after her arrival & it was SO fun to introduce her to everyone! The boys came with Anthon's mom the next afternoon and it was SO sweet to introduce her to them for the first time. Conrad seemed genuinely frightened when he first saw her- haha!! He warmed up to her a little bit eventually, but Roman and Sterling instantly fell in love with her!! They both had the biggest smiles on their faces and sparkles in their eyes as they held her and examined her little features. 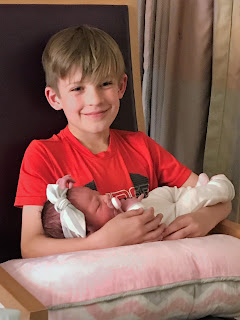 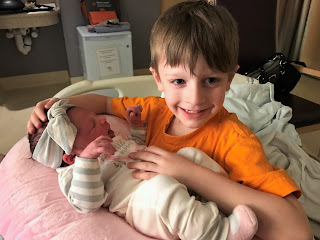 We were only in the hospital for 24 hours before we got to come home and it truly has been the easiest delivery and recovery that I've had so far! I'm so grateful that everything worked out the way that it did (Anthon did awesome on his test, by the way!) and that we have this beautiful little girl to love on and play dress up with! We'll see if my tune changes once Anthon has to go back to school on Monday and I'm flying solo with all 4 kids, though... wish me luck!!